The Relationship between the Area of a Circle and its Circumference, Part 1: Manipulating Formulas 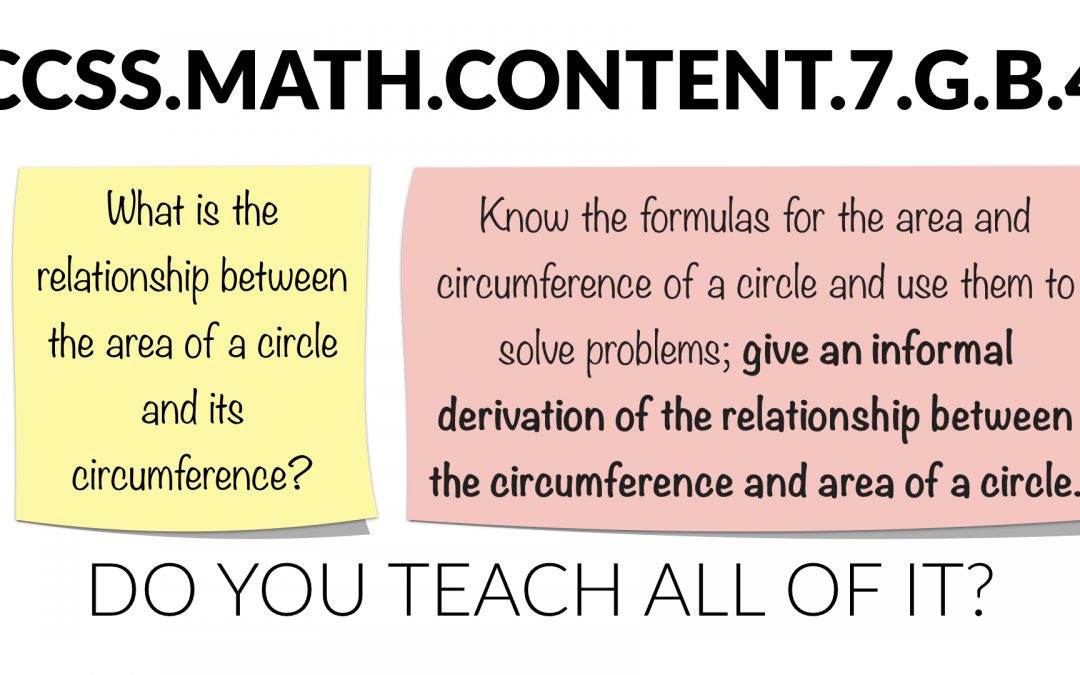 In fact, I have truly neither considered the relationship between the circumference and the area of a circle nor do I know of any teachers who have talked about doing the same. They may have; they just never told me about it.  This blogpost represents my first shot at understanding it.  Like relating the area of a rectangle/ parallelogram to the area of a circle, I challenged myself to think of it visually each step of the way during successive manipulations to the formula.  I have to admit at the onset that I have only been partially successful at this point.  Some relationships I could understand, but I had a difficult time expressing them visually.  Others I could not visualize at all after a first pass. I’ll have to presevere in my problem solving.

In part one, I am able to provide some Sticky Math Triads to put the process before students and teachers.  I am also able to hopefully shed some light on the resulting relationship through the use of visuals in part two.  So, in a break from tradition, I will actually start with the symbolic, algebraic formulas and finish with the visuals.  There is always an exception to the rule isn’t there?  What follows could be a single lesson; although, you might be better off focusing on the manipulation of formulas for one lesson and understanding the relationship in the following lesson both have valuable connections to other concepts you could explore in the process.

WHERE DO WE BEGIN?

We begin by looking at what we know about circumference & area.  Students could brainstorm this before you unveil the Sticky Math Pair below, which incidentally might be my warm up for this lesson.  The ultimate goal is for students to realize both formulas share pi and r, the radius, in common.  We will focus on the radius as pi is a constant.  The first method employs substitution while the second method employs the Transitive Property. 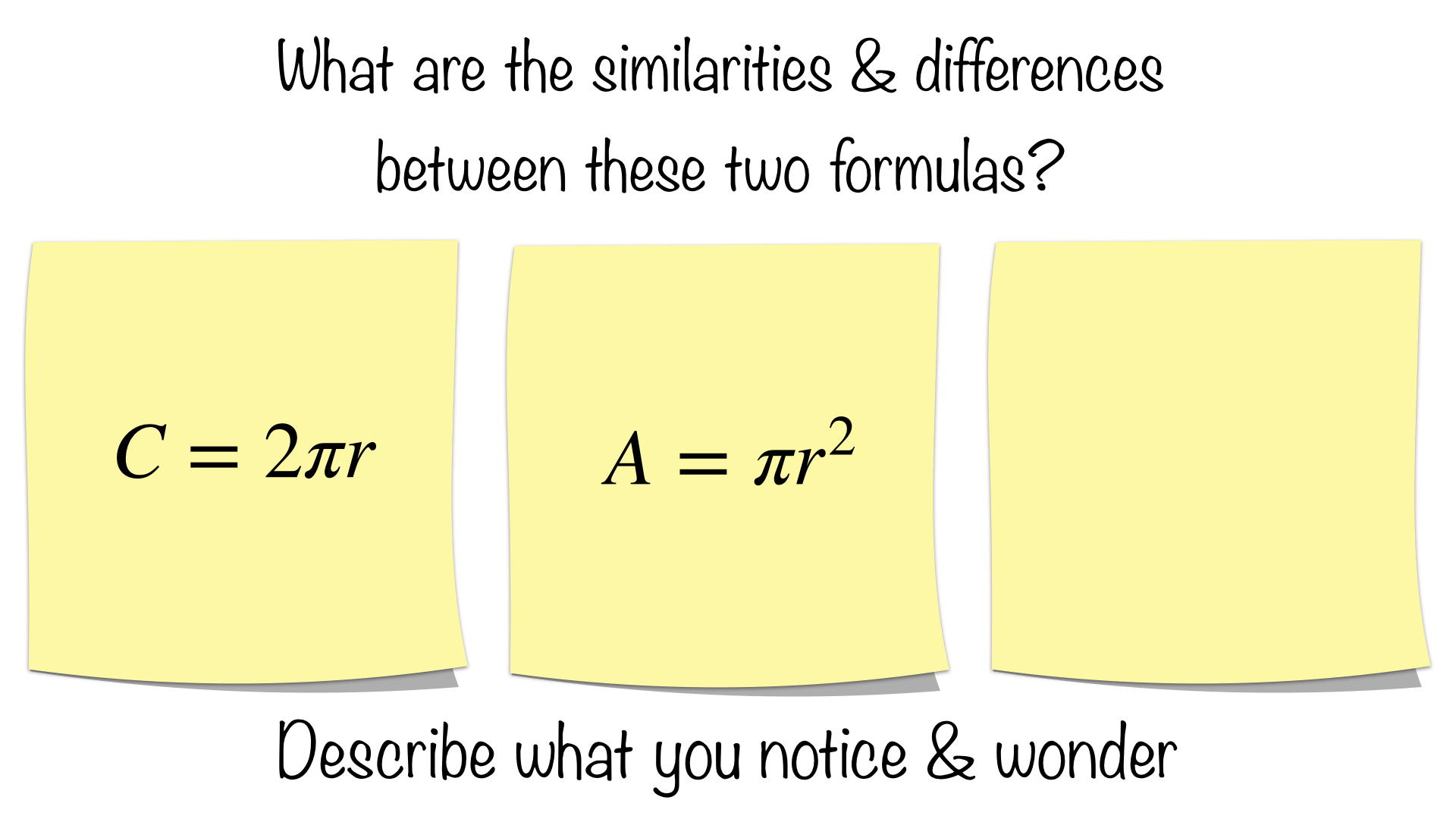 This Sticky Math Pair might seem overly simplistic and not worthy of the time; however, it provides valuable repetition, a chance to utilize vocabulary, and formative assessment as well as a chance to explore some other foundational concepts.  Similarities (with purposeful questions to pose) could include:

Differences (with purposeful questions to pose) could include: 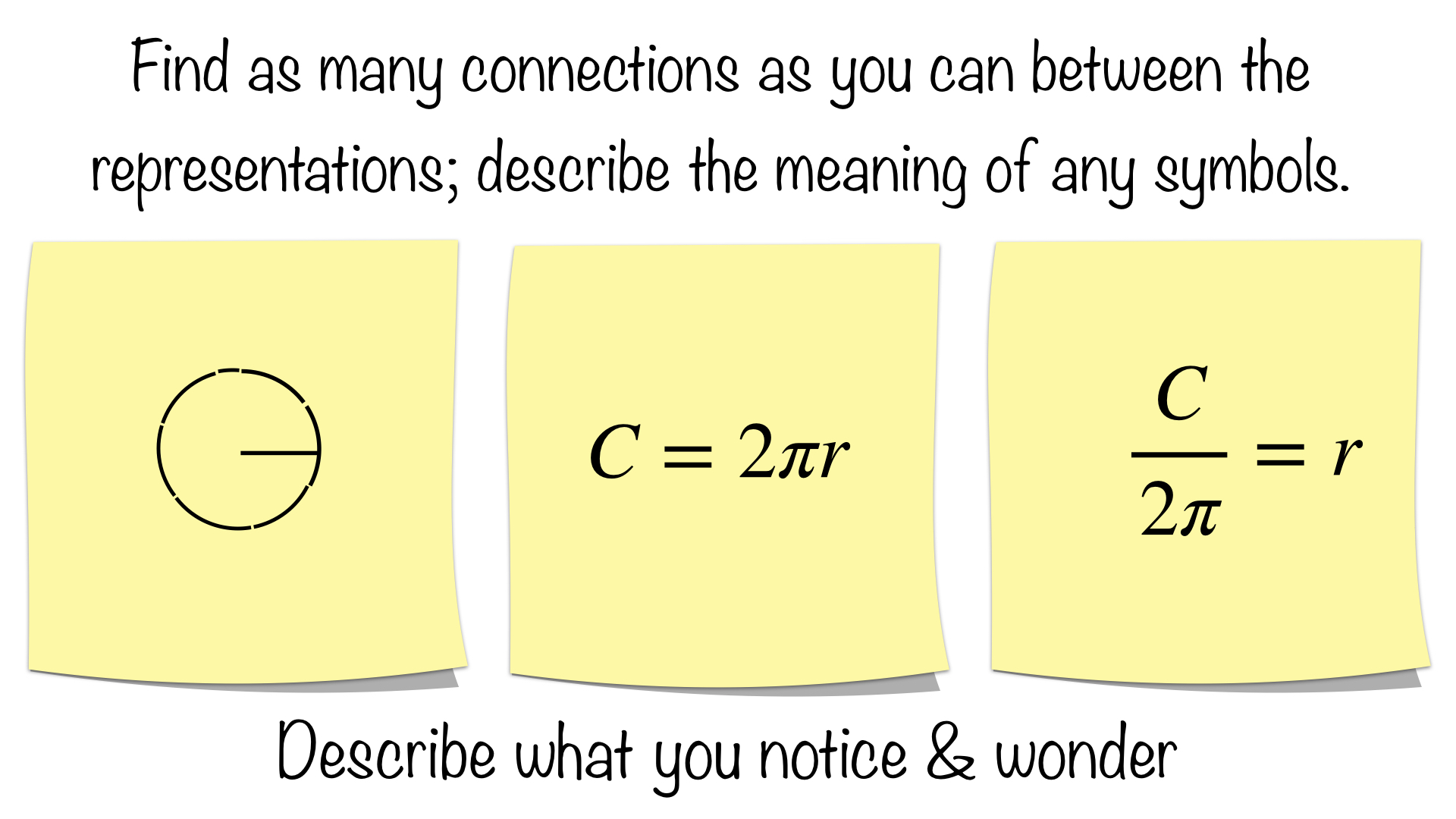 The key here is to see that if you divide the circumference by a little more than 6 or two pi; then you get the radius.  We will need the definition of the radius in the next step.

INTRODUCING CIRCUMFERENCE BY SUBSTITUTING FOR THE RADIUS

The point of the following Sticky Math Triad is to see the substitution of the value of r into the area formula: 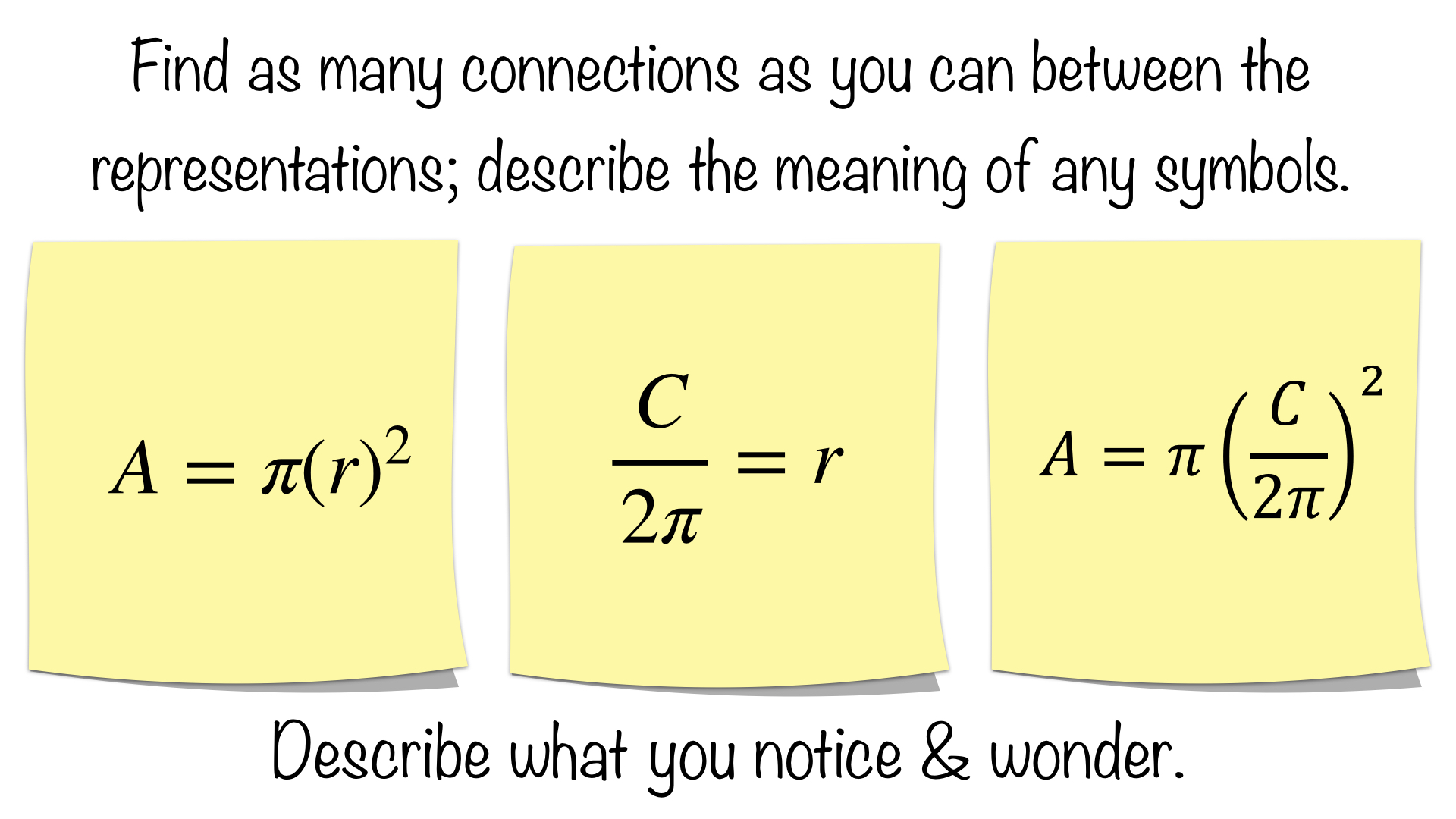 Once again, the key here is to see the substitution of the value of r into the area formula.  Notice the fact that the same variables are included in two of three formulas is a clue to that happening.  Another clue that students may not pick up on is in the final bullet above, which could be shared as, “someone in my other period noted that…” (you don’t have to tell them it was you.). The presence of pi twice in the right sticky is yet another clue.

Here is a quick note about a powerful three letter word, why.  Students might make & state a connection; however, that is just the beginning of the journey.  Part of the purpose of Sticky Math is to promote student discourse.  Ask all students to engage with one another in pairs or small groups around one student’s connection by posing a purposeful question.  Anticipating these types of advancing questions (Smith & Stein, 2011) is best; however, an easy three letter fallback is “Why?”  Repeating it often would not be as powerful as mixing it up with some other well anticipated questions; yet, it is sometimes preferred and can help build a culture and expectation of understanding in the classroom.  Incidentally, by stopping the class to consider one student’s connection, you are promoting mathematical agency, authority & identity in that student and in others as you ask them to consider your purposeful questioning rather than simply illuminating the connection yourself via direct instruction. 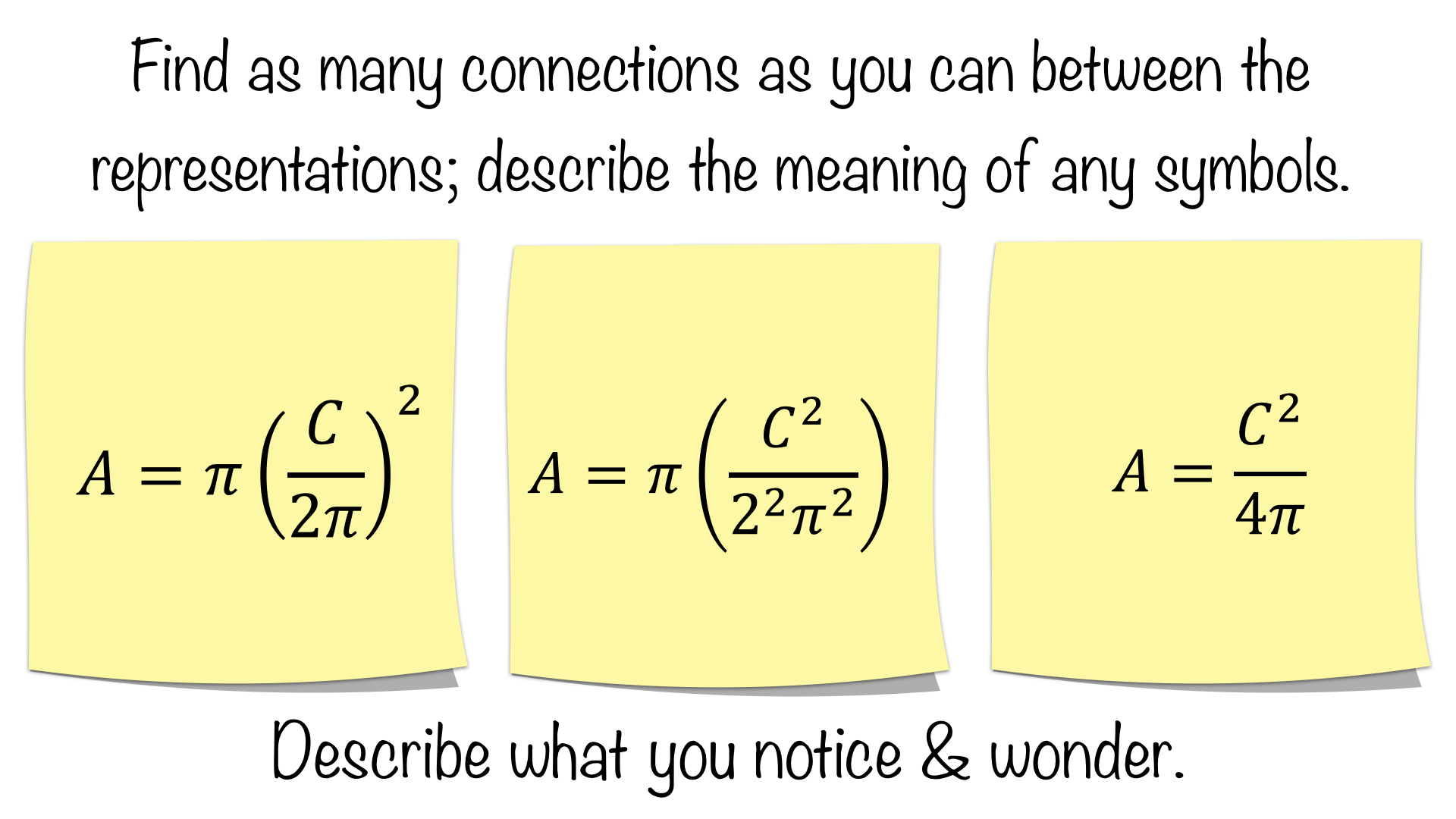 We often jump right into simplification of expressions.  By providing the mathematics here, we can examine what is happening to increase procedural proficiency before asking students to engage in the process themselves.  It also provides a chance to examine the reasoning behind what is being done so students can learn when and why to do such things rather than simply how.

A Sticky Math Quad is a rare sighting here on the website when it is not a part of a comparison between two Pairs.  One of the connections we hope students might make might help you understand it as we move forward here.  It is organized clockwise from the top left sticky: 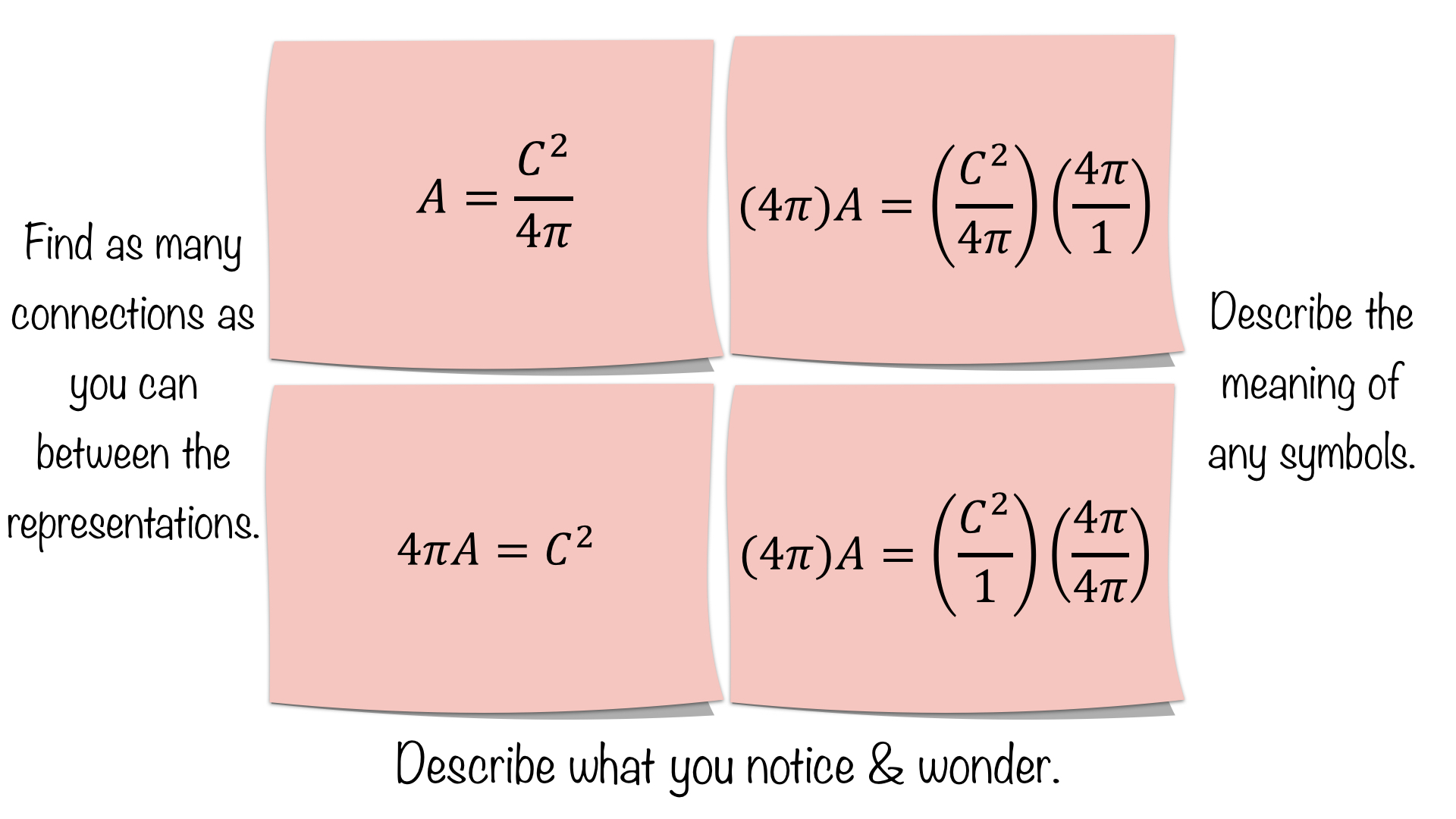 We have arrived at our goal of defining the relationship between the circumference and area of a circle, but I doubt many people, especially our students, might realize it.  The relationship is not as simplistic as students are used to finding, and it is certainly not easily understood by them.  While this has been a valuable exploration in developing procedural fluency in manipulating formulas, I suggest seeing it through to fully understanding the relationship exposed by this new equation, which is found in part two.