The Relationship between the Area of a Circle & its Circumference, Part Two: What does it Mean? 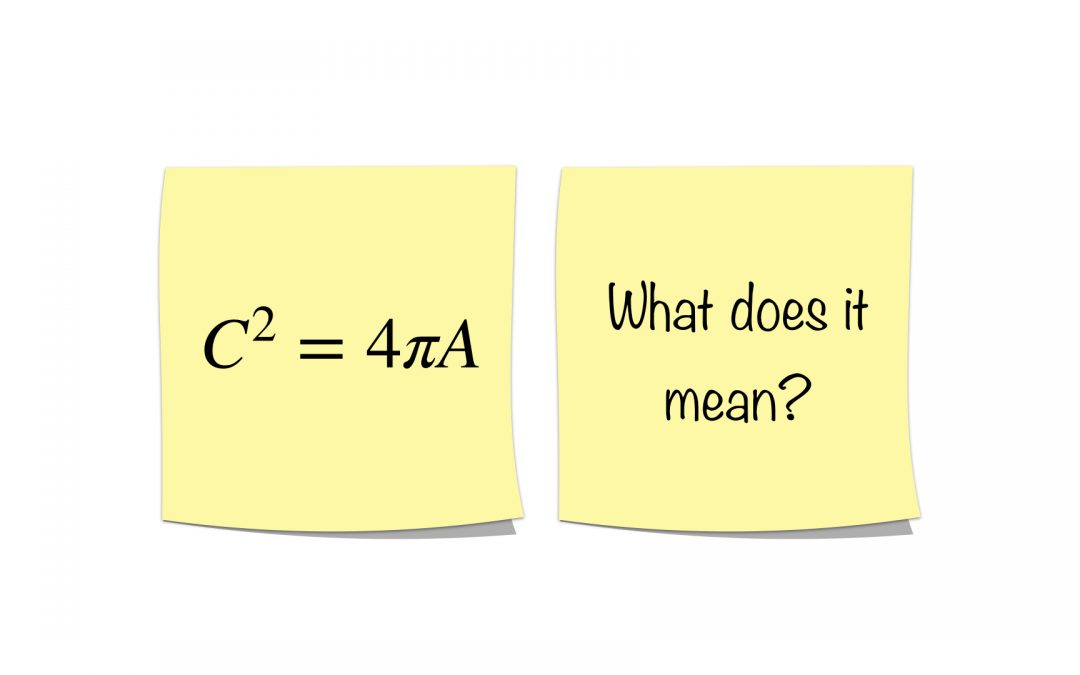 In part one, I provided some Sticky Math Triads to put the process before students and teachers.  While I struggled there to provide visual representations, I believe I have accomplished the goal here as we examine the resulting relationship here in part two.  What follows could accompany part one in a single lesson; although, you might be better off focusing on the manipulation of formulas for one lesson and understanding the relationship in the following lesson.  Both have valuable connections to other concepts you could explore in the process.

WHERE DID WE LEAVE OFF?

Through a series of manipulations, we found that that: 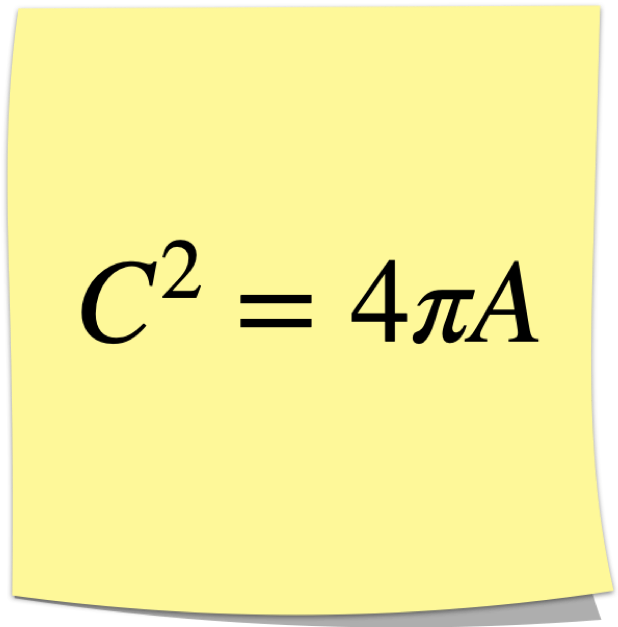 What does it mean though?  What is the relationship between the area of circle and its circumference?  The right side is a little more complicated to understand so we will start there.  Let me first acknowledge that you could save a period of instruction by simply telling students the relationship in one of the following ways:

The problem is that if you did so, then it would be soon forgotten.  In fact, one might argue the value in spending any time on this part of standard 7.G.B.4, “give an informal derivation of the relationship between the circumference and area of a circle.”   I personally cannot think of a single instance of when I had to use this relationship to solve a real word or mathematical problem.  So why spend the time at all?

I would argue that this part of the standard allows us to explore circumference and area in greater depth while allowing students an opportunity to gain and use academic vocabulary; however, besides the process being of value in of itself as illustrated in part one the greatest value of the endeavor might be the exploration of the meaning of a quadratic term, which has multiple applications elsewhere.

With that in mind, we begin with the meaning of the expression on the right side of the equation as it is bit more difficult to envision.

Need some rigor for an honors course?  Ask them that question.  The problem is you would not have time to ask them as you would be rushing on to learning more content procedurally.  It is a shame that we limit the beauty and understanding of mathematics through certain pathways of acceleration over others that would not do so.  Common core standards define rigor as conceptual understanding, procedural skills & fluency, and application.  This should be an option for all students; not a select few.  Sticky Math provides the option for all students. So let’s get started by connecting to previous work from understanding the area of a circle in terms of square units from a previous blogpost (this is best done before engaging in this task): 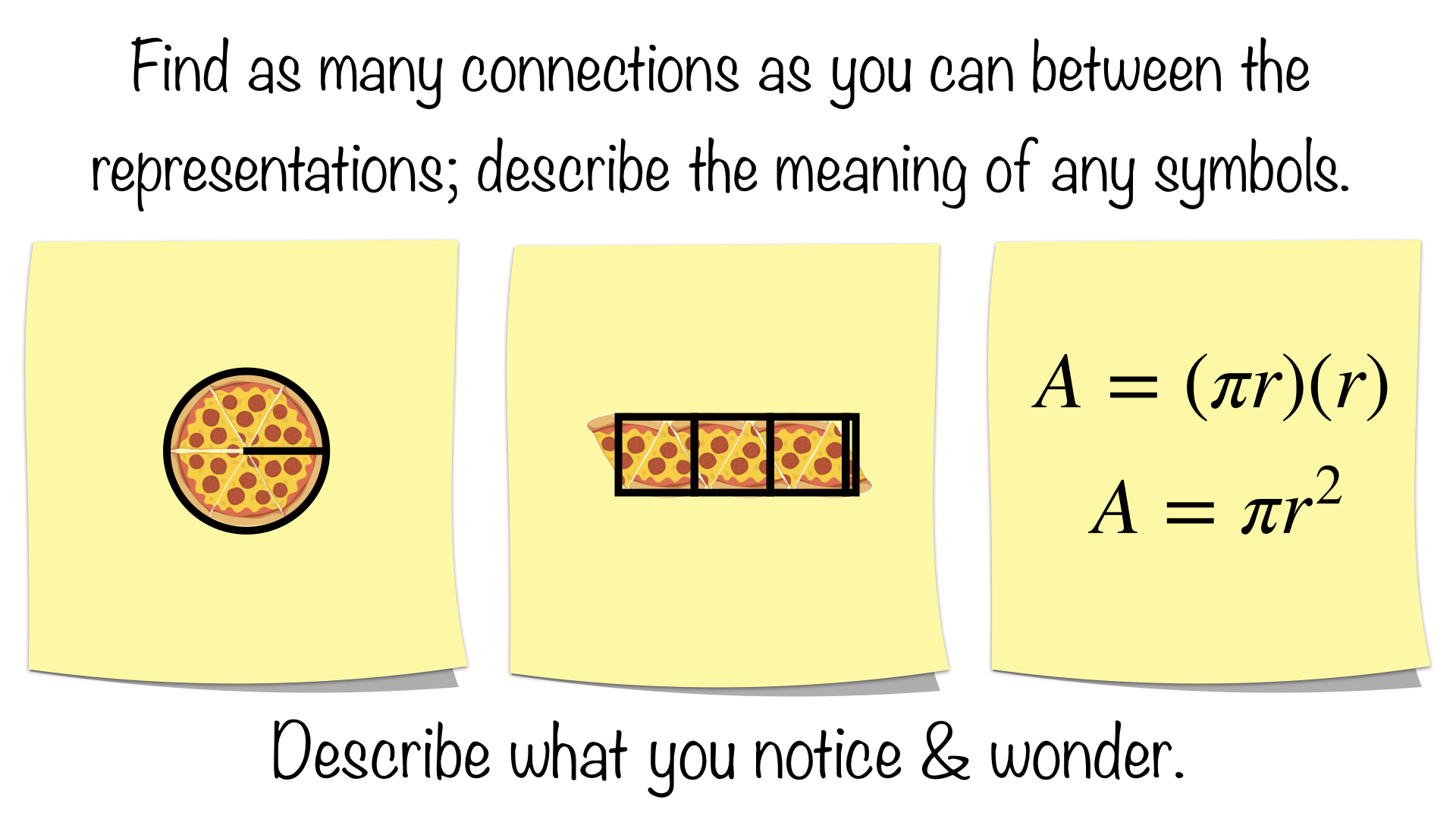 Students may not have made all the necessary connections when examining the area formula of a circle when relating it to a rectangle/parallelogram the last time (see former blogpost on the subject); this gives them another opportunity to do so.  I will not elaborate much here as I have already done so in that blogpost; however I will point out the goal here is to understand what the A in 4πA means.  Once we know what A looks like then we can explore πA.

Once A has been established, then we can move onto seeking to understand what πA looks like: 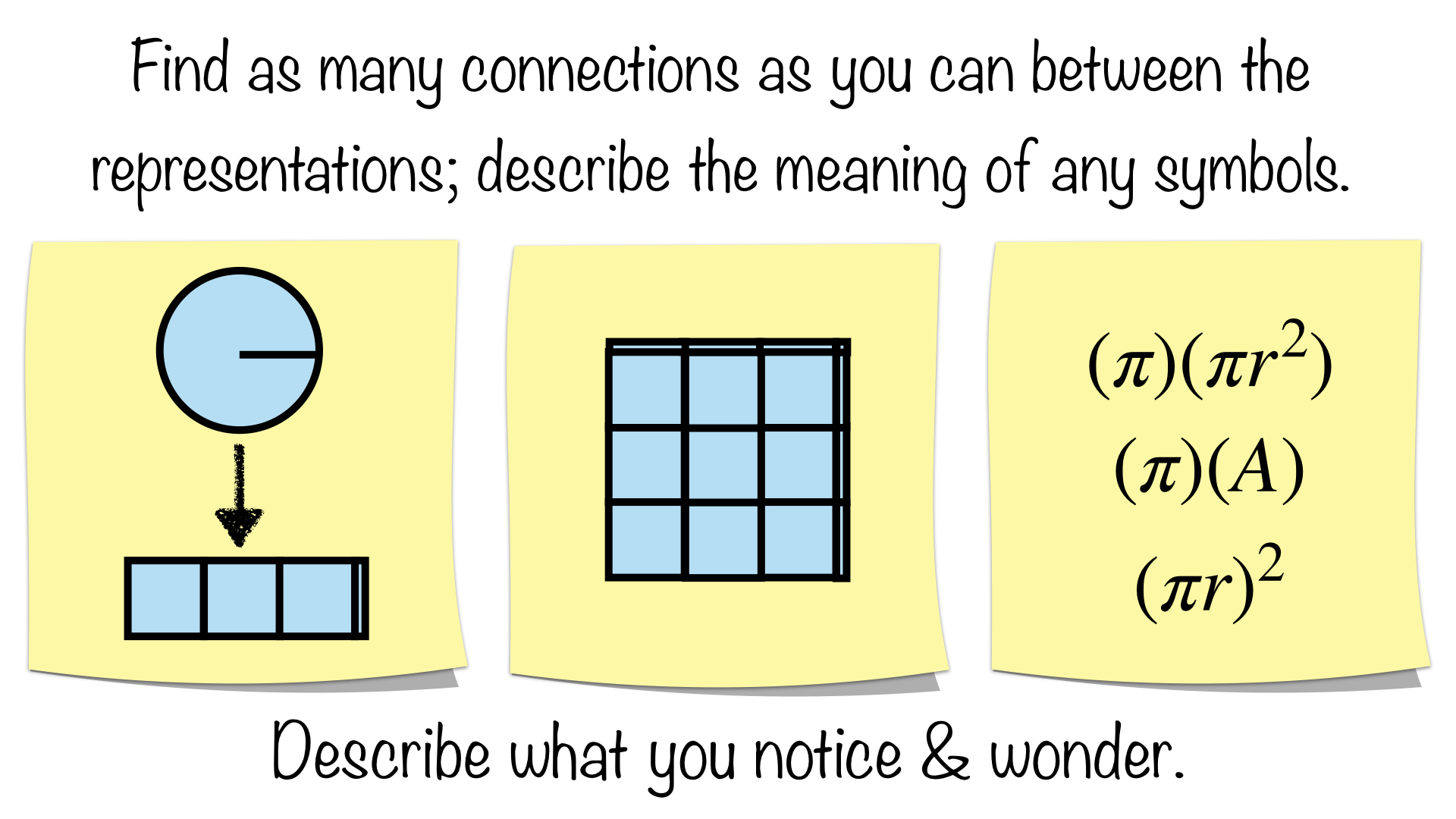 Students and adults may struggle with this one as it is rigorous; it requires the application of conceptual understanding and procedural skills together.  The key is to see and understand area as base and height.  The base in this case is the area of a circle reformatted into square units and the height of it is pi.  Some purposeful questions to help students and adults “see it”:

Once students or adults see that the area of the circle has been repeated pi times or that you have pi groups of the area of a circle, then you can move onto examining the final part of the expression.

If you have gotten this far, then completing the expression with the factor of four should be a little easier to see and to grasp: 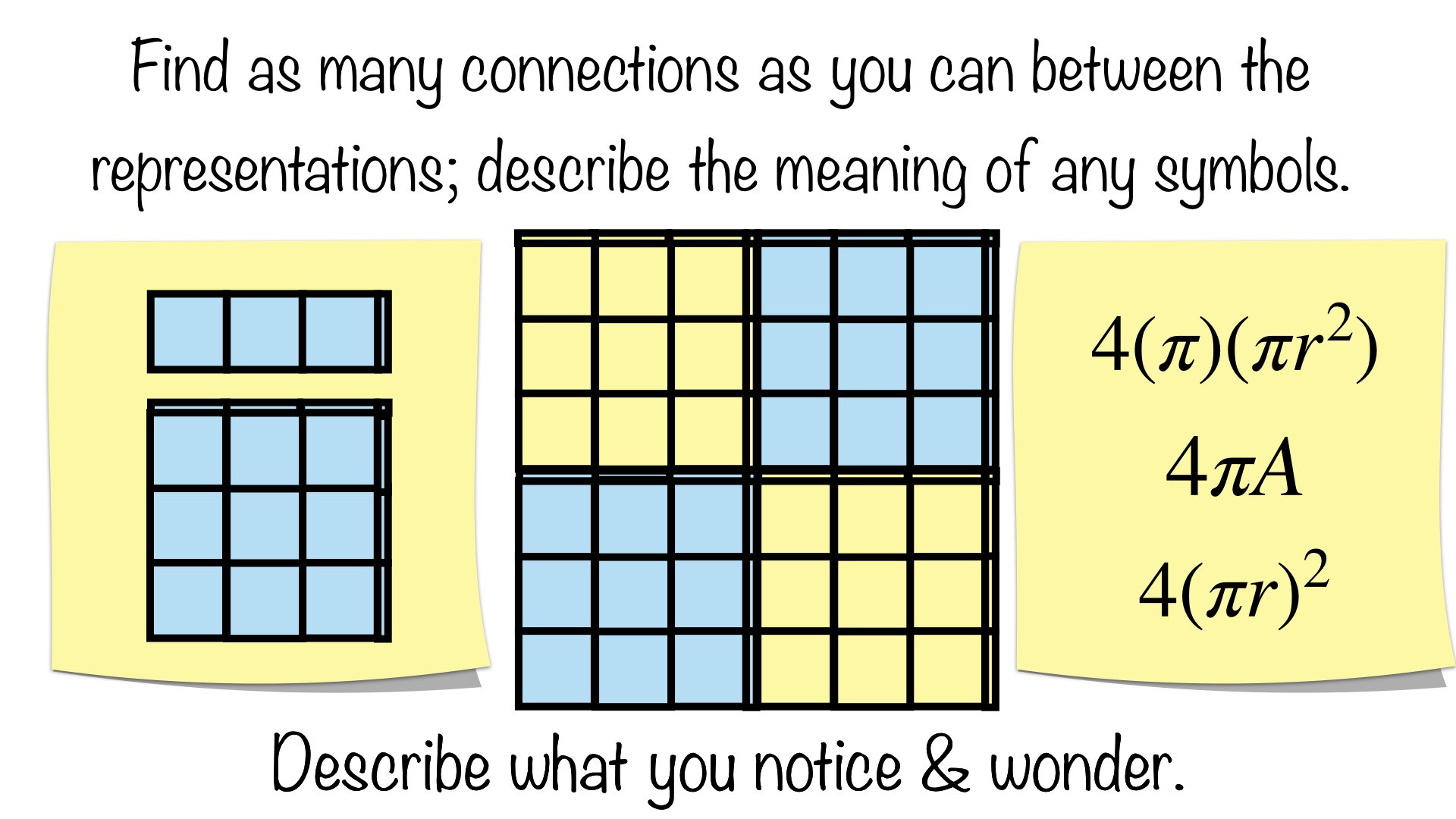 The main takeaway here is that the middle “sticky” is a visual representation of 4πA.  Once that is established, then you can compare it to the other side of the equation circumference squared.

Before we can compare one to another, we must establish what circumference squared looks like.  The pink sticky below represents one of the larger rectangular stickies; using these helps keep the drawings here more to scale. 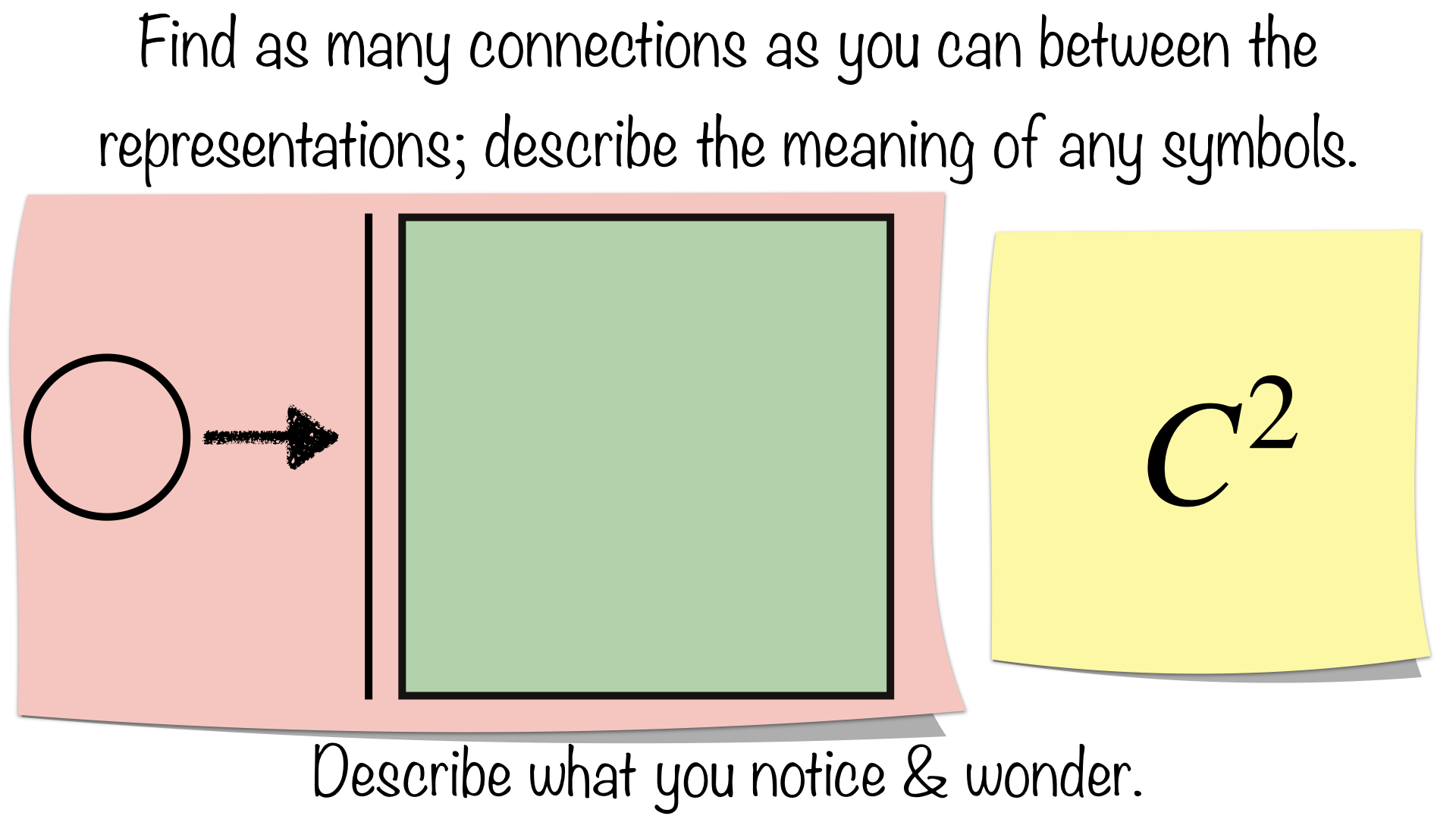 The main takeaway here is that C squared is the green square. Once that is established, we can finally compare the two sides of the equation and examine the relationship between them.  The moment we have all been waiting for and working towards! (If you made it this far…)

WHAT IS THE RELATIONSHIP BETWEEN THE AREA OF A CIRCLE & ITS CIRCUMFERENCE?

We have finally arrived. One note, I will refer to the left two drawings below as stickies, but they are really drawings made to scale.  This is one of those times, where you probably will not be drawing the representations on a sticky note and projecting it.  Another time is the Pizza Pi stickies above.  Feel free to project them from the gallery.  By the way, the yellow, blue and green are not coincidental.  Remember your primary colors: yellow & blue make green! 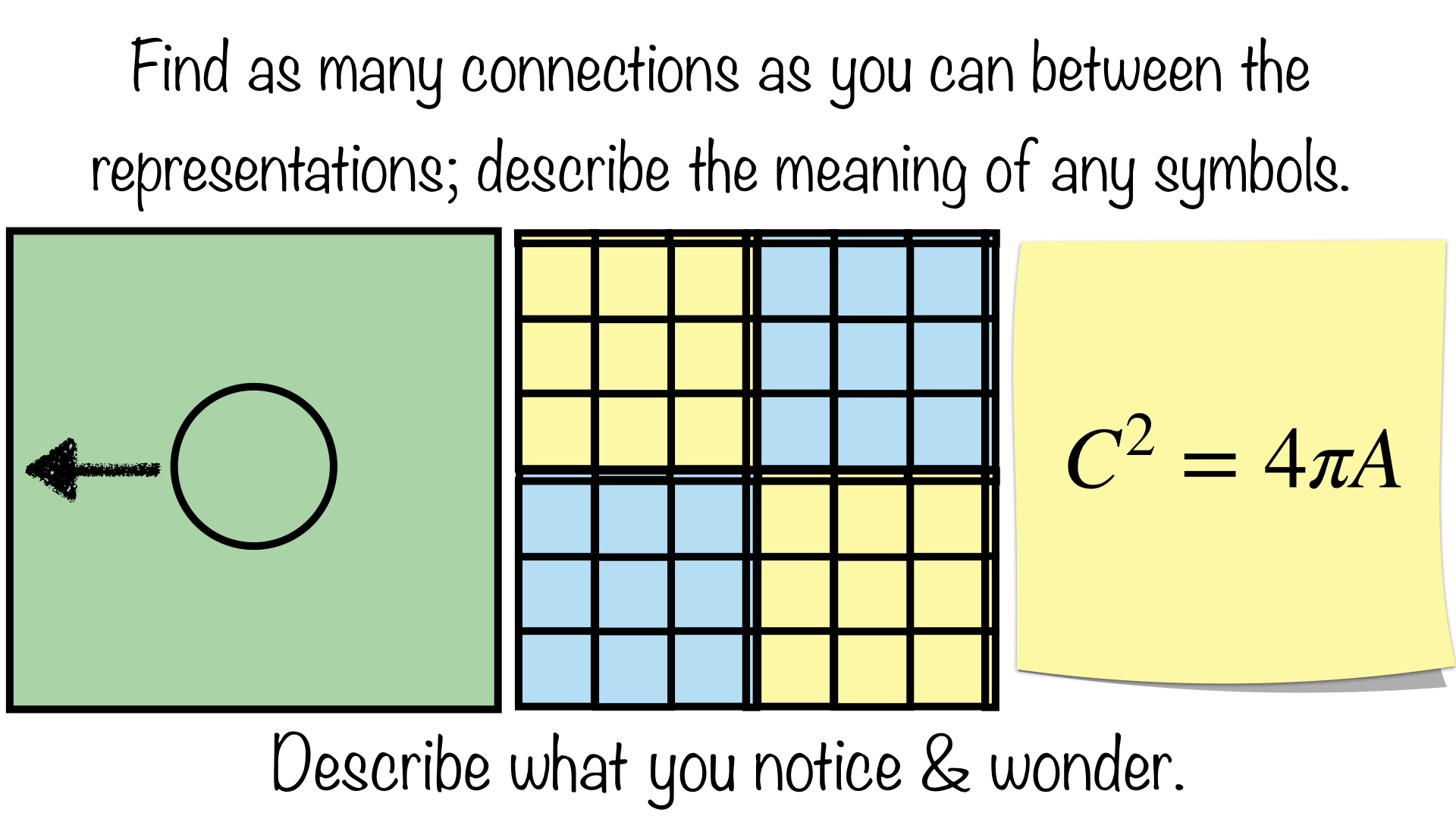 There you have it; a visual representation of the relationship between the area of a circe and its circumference!  Other representations like verbal descriptions are great formative assessments as whether or not students are “seeing” the relationship correctly, and there is a third sticky above to request students to construct them.  Or, you could use either of the following: 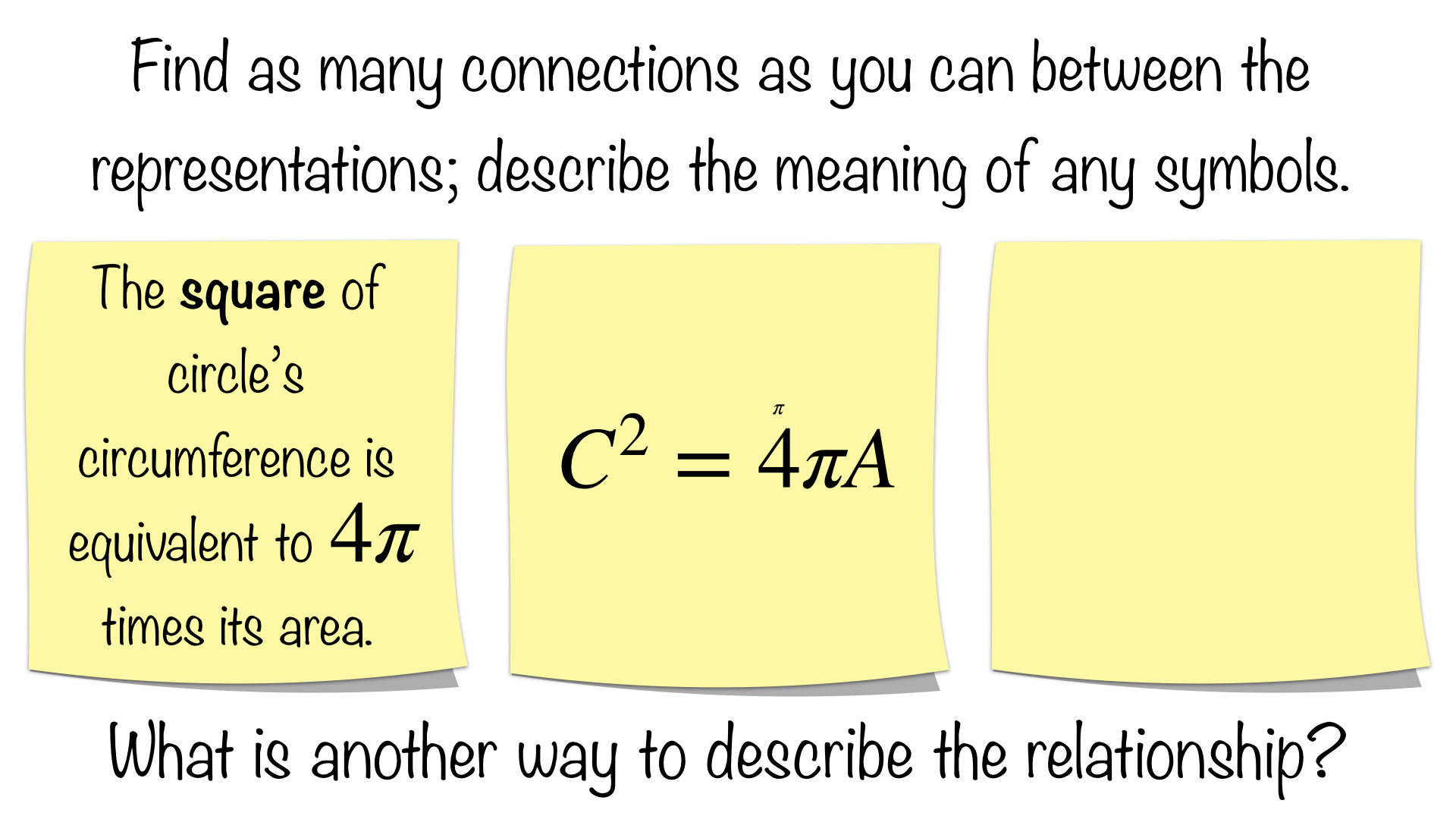 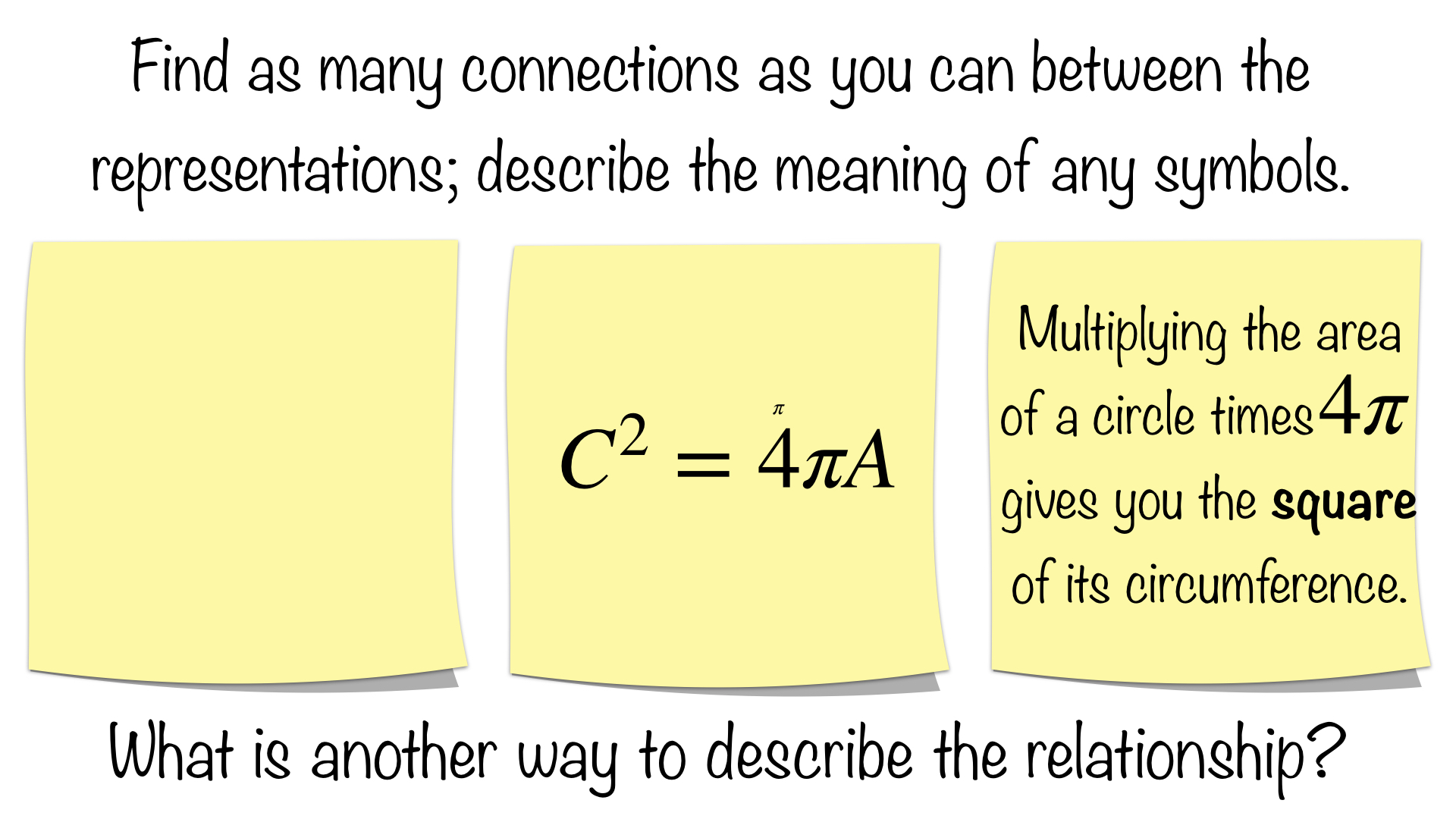 So, I feel like this will be the best blogpost that no one will ever read.  I use “best” in the terms of myself taking the understanding of algebra as area to new levels personally.  I’m not that arrogant to assume it is the best blogpost ever; far from it; although, I do try to always acknowledge some level of arrogance.  I hope if you did make it through that it added to your understanding of algebra as area, which you can take before students whether it is in the form of these stickies or others.  For more on the subject of algebra as area, see my sister site, meaning4memory.com.  Should you try these stickies with students, I would love to hear how it went, and how you might modify them to make them more understandable.